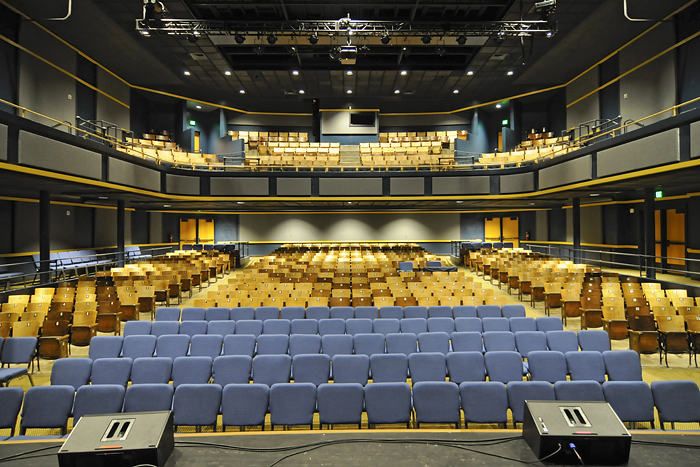 Here’s the link to the online story: Washington High School

If the former Washington High School building in Southeast Portland were converted into housing, its central auditorium would likely have become a light well.

Instead, a $20 million renovation that transformed the residentially-zoned building into a mix of office and retail space preserved the auditorium so that performances can return.

“We always thought it had to be housing,” said Jessica Engeman, a project manager and historic preservation specialist with Portland-based developer Venerable Properties. “It just didn’t feel like the right project for so many reasons.”

But scrapping the housing plans and keeping the auditorium intact presented a series of challenges for Venerable, investment partner PacTrust, project designer SERA Architects and general contractor Bremik Construction. Among the most significant were insulating sound produced in the auditorium from the surrounding 50,000 square feet of creative office space. The development team was also tasked with ensuring they could recoup the investment of transforming the former school auditorium into Revolution Hall, a modern, multipurpose event space.

Project team members covered these topics and others related to the effort to preserve and revitalize the 91-year-old Washington High building last week during a panel discussion in the freshly renovated auditorium.

“The room we’re sitting in right now was probably the thing I was most excited about – I love music – but also the thing I was most scared about,” said Eric Sporre, vice president of asset management at Portland-based PacTrust. “By and large, (for) our tenant base here it’s been a draw for the building.”

The school closed in 1981 because of declining enrollment. When Venerable and PacTrust purchased the property from Portland Public Schools in late 2013 with plans to renovate the building, it had sat vacant for decades.

Venerable’s late founder, Art DeMuro, was an ardent historic preservationist who became captivated by the former school building and wanted to see it restored, Engeman said.

“Before he became sick with cancer, this was really a development that caught his eye,” she said.

DeMuro’s goal to preserve the building drove the way it was renovated, Engeman said. She recently submitted a nomination for the building to be added to the National Register of Historic Places.

Much of the original school finishes were preserved, including lockers, blackboards, classroom clocks, cabinets and intercoms.

“There was no doubt that the classroom spaces were going to maintain their classroom character,” Ehlbeck said. “That was a very clear mandate.”

The auditorium was also carefully preserved; many of the wooden seats were restored. Cradock said he was immediately attracted to the space and saw the potential for it to host concerts and other events.

“We had dozens and dozens of conversations with Venerable about how we could curate the venue,” he said. “This town doesn’t really have a world class, state-of-the-art concert venue and now it does … It would be a shame if this was a light well. When you hear a concert in this room you’ll really understand.”

The tricky part was making sure the venue penciled out financially, Cradock said. Adding a roof deck to the building with panoramic views of downtown Portland and renting it out for weddings and other private events has helped, he said.

“The roof deck kind of padded the economics for us,” Cradock said. “It’s the best view in Portland, bar none.”

Joann Lay, a carpenter with Bremik Construction and journeyman member of Local 1503, drills holes for brackets for a canopy frame on the roof of Washington High School. (Sam Tenney/DJC)

Creating the roof deck took a leap of faith that appears to be paying off, Sporre said.

“You’re also spending big money on something you don’t know has any revenue stream on it,” he said.

The roof deck was a larger investment, but the development team found other ways to save, Sporre said. A minimally invasive renovation that preserves much of the existing building kept costs down because no seismic upgrade was needed, he said.

As with any older building, there were surprises as construction crews pulled away portions of the former Washington High School, Parry said.

“Historical renovations are always challenging because you’re working on an existing building and there’s always constraints on what you can and cannot do,” he said.

The project team spent a significant amount of time figuring out how to keep the noise in the auditorium out of the office spaces, Ehlbeck said. To resolve this, a spring isolated ceiling was installed in the auditorium and doors were insulated heavily.

Chevassus said New Seasons officials weren’t bothered by the idea of sharing a building with a concert venue.

“We actually went through a sound test almost before most of the improvements and we thought, ‘We can live with this,’ ” Chevassus said.

Cradock said Revolution Hall will do its best to be a courteous neighbor to the office tenants.

“It’s still a science experiment, but something that I think will be very successful,” he said.