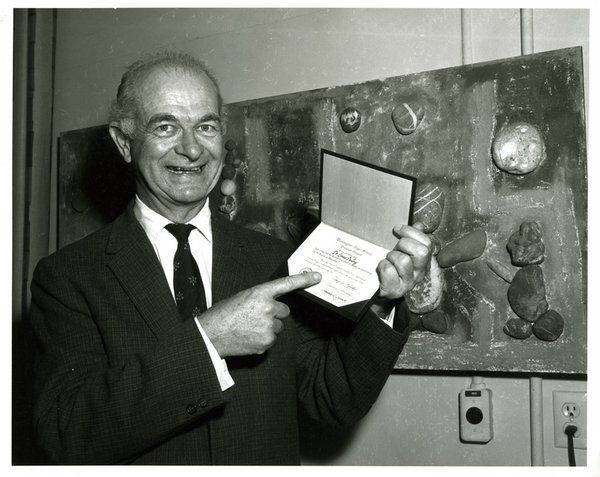 My father, who died when I was nine years old, had recognized that I had an unusual interest in reading and in obtaining knowledge. It is my opinion that the many excellent teachers I had contributed very much to fostering this interest. I remember in particular several teachers at Washington High: Miss Pauline Geballe, who taught me my first course in science; William Greene, who taught me my first course in chemistry and gave me special instruction during the following year; and my several teachers in mathematics. I feel that my early education in Oregon was outstandingly good.”

While researching the history of Washington High School, we learned that Linus Pauling was an alumn.  He was a very influential chemist who ranks among the most important scientists of the 20th Century.  And he has a Nobel Prize in Chemistry to prove it!  Pauling made great contributions to the fields of quantum chemistry and molecular biology in particular.  After World War II, he became a peace activist and won the Nobel Peace Prize in 1962.

When Pauling was a student at Washington High (the original WHS, that is), his love of chemistry really took off.  He scavenged much of his equipment and materials from an abandoned steel plant in Portland and started “Palmon Laboratories” with a friend.

At age 15, Pauling was already a senior and had enough credits to enter Oregon State University, but he had not completed two required American history courses that would allow him to graduate.  He asked the principal of Washington High School if he could take these courses concurrently during the spring semester, but the principal denied his request, and Pauling decided to leave WHS in June without a diploma.

Forty-five years later, Washington High finally awarded him his diploma.  Hop on over to the Pauling Blog to read more about how a high school journalist took action in 1962 to get Pauling this belated recognition. 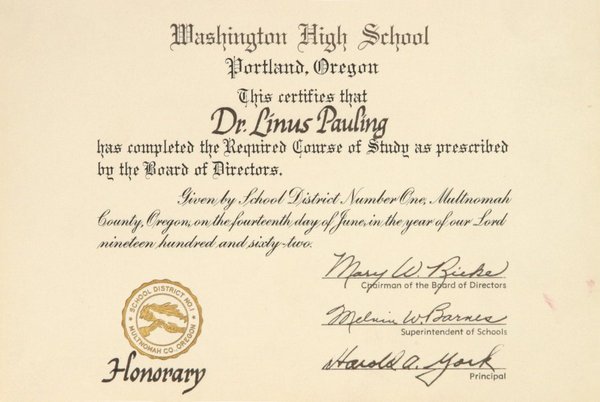